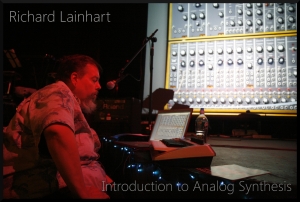 Ethereal Live is honored to posthumously release this in depth lecture by Richard Lainhart which covers a discussion of analog synthesis fundamentals and demonstrations of modular electronics. This release marks the first of its’ kind for Ethereal Live, but we feel the information discussed in this lecture is of relevance and interest to most patrons of the the net label.

Introduction to Analog Synthesis was a lecture given at the Pocono Skies festival at the Shawnee Playhouse, PA. USA in the Pocono mountains in the Spring of 2010. This one-off festival featured performances, collaborations, workshops and lectures over the two day festival weekend. Richard presented this lecture Saturday afternoon May 16th, 2010 to a crowd of enthusiastic synthesists and electronic musicians.

With permission from Richards’ wife, Caroline Meyers, Ethereal Live is very proud to release this succinct and informative discussion of analog synthesis suited for new-comers and experienced users alike, by one of the great practitioners and composers of electronic music, Richard Lainhart.

If you enjoy this tutorial on analog synthesis, be sure to check out Richards’ Advanced Synthesis videos.

All material by Richard Lainhart Copyright © 2012 released under a Creative Commons license for free non-commercial use under certain conditions CC BY-NC-ND 3.0 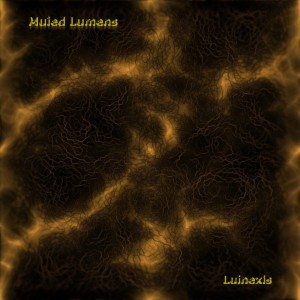 It is our pleasure at Ethereal Live to welcome our friend and lucky number 13, Muied Lumens to the net label. Muied Lumens has been creating and performing electronic and ambient music for two decades in his homeland of Norway and currently in Bristol, UK. Rob Solheim as he is also known, is a multi-instrumentalist wielding synthesizers, guitar, electronics, and wind instruments with equal precision and grace. Notably, Rob uses the incredible Kyma synthesizer to design and compose a lot of the music he creates.

Muied Lumens is an avid live performer and co-hosts with Modulator ESP (Jez Creek) live internet performances at electro-music radio called “Adventures in Sound”. “Adventures in Sound” has been ongoing for over 2 years now weekly. This deeply engrossing longform track is one of those live broadcasts. Recorded live July 20th 2011, “Luinexis” is a tour-de-force of epic and bold sounds that twist and turn throughout the 58 plus minutes of this set. For this performance, Muied Lumens used Kyma and Proteus 2000 synthesizers, and a home-made guitar. “Luinexis” is a beautiful work that saunders through fields of ambient soundscapes, textured feedback, and ripples of experimentalism that will equally please either your introspective or extroverted moods.

All material by Muied Lumens Copyright © 2011 released under a Creative Commons license for free non-commercial use under certain conditions CC BY-NC-ND 3.0